In the ‘virtual markets integrity initiative’ report published by OAG, Attorney General Barbara Underwood said her office referred Binance, Kraken, and Gate.io to the New York Department of Financial Services for possible violation of digital-currency regulations. Each of those exchanges had earlier refused to provide information requested by the state. The three firms didn’t immediately respond to requests for comment.

“New Yorkers deserve basic transparency and accountability when they invest – whether on the New York Stock Exchange or on a cryptocurrency platform,” Underwood said in a statement. “Many virtual currency platforms lack the necessary policies and procedures to ensure the fairness, integrity, and security of their exchanges.” 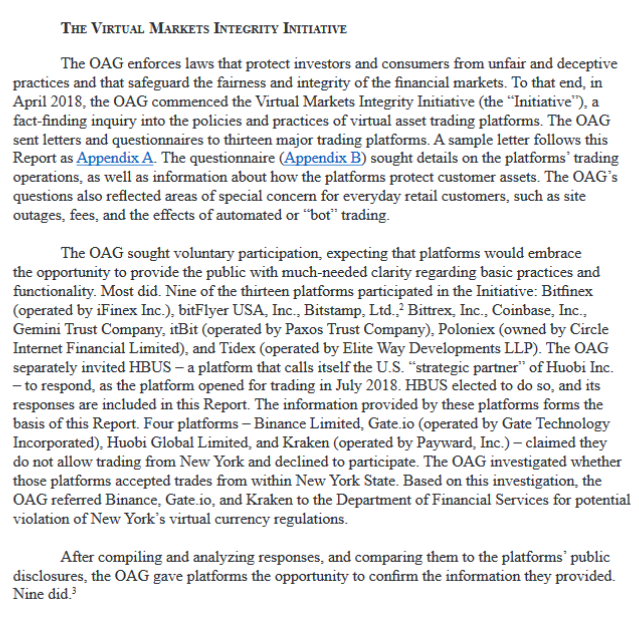 In April, the attorney general began asking 13 major crypto marketplaces for details on their operations, internal controls, and safeguards against market manipulation and fraud. Nine of the platforms participated, while the other four claimed they don’t allow trading in New York. Kraken Chief Executive Officer Jesse Powell in April dismissed the office’s request in a tweet.

Somebody has to say what everybody's actually thinking about the NYAG's inquiry. The placative kowtowing toward this kind of abuse sends the message that it's ok. It's not ok. It's insulting. https://t.co/sta9VuXPK1 pic.twitter.com/4Jg66bia1I

Binance is the world’s largest crypto exchange by trading volume, according to data compiled by CoinMarketCap.com. Kraken is ranked as the 14th biggest and Gate.io is the 27th.

The report found three “areas of concern” in the crypto markets, specifically flagging lack of protection from abusive trading practices, conflicts of interest and limited safeguarding of customer funds.

“Virtual asset trading platforms have yet to implement serious efforts to monitor and stop abusive or manipulative trading,” Underwood said. “Few platforms seriously restrict, or even monitor, the operation of ‘bots’ or automated algorithmic trading on their venue.”

An interesting thing mentioned in the report is: