Cryptopia is Losing their Game: On their way to Become One of the Worst Crypto Exchange?

Cryptopia.co.nz trading exchange, which was launched in 2014 by Adam Clark and Rob Dawson had excellent reviews initially, especially when it didn’t have a great number of customers. In the early days it was said they are heavily focusing on creating a fully immersive cryptocurrency experience for users, making it a one-stop shop for all trading, information, and news. But it seems like Cryptopia is losing their game.

What’s wrong with the exchange, NOW?

On social media channels many users are complaining about the exchange lately. Not just with withdrawals or deposits but with the overall service of the exchange. Seems like Cryptopia didn’t expect it’s user base to grow so quickly and once it’s grown, they are finding it super hard to keep up with the customer issues.

Cryptopia charges more than 60,000 us dollars to list a project in their exchange. For an exchange that’s ranking really low with a bad reputation in customer care and low trading volume, this is the main reason why good projects are least bothered to list their cryptos in the exchange.

In January this year, NZHerald.co.nz reported that Cryptopia has told customers its bank is closing one of its accounts. The company said the bank’s move had come at very short notice and with little opportunity for the company to present its case and provide compliance documentation. It is understood that the company had been banking with ASB Bank. However they seem to have fixed the issue later on and resumed their trading pairs with NZDT. 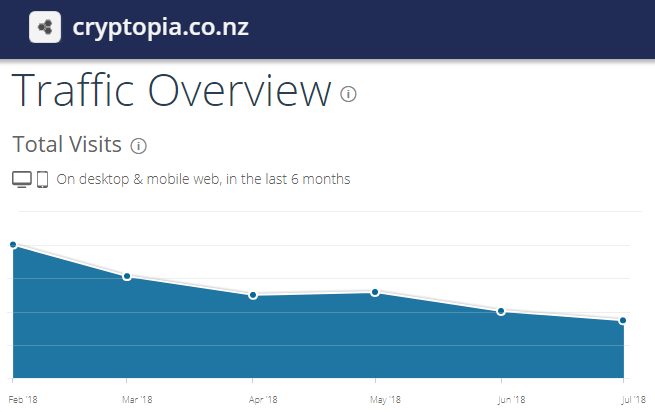 These issues they are having and their failure to keep up with things in the recent months seems to be taking customers away from their website. Their visitors data shows a steady decline from February 2018 to July 2018. In six months Cryptopia has lost over 60% visitors, shows traffic stats on similarweb. This has massive effect in their trading volume as well. Their rank in Coinmarketcap has fell to 89.

If they continue to be the same, it won’t take much to be out of the top 100 crypto trading exchanges. Especially at a time where tons of new exchange projects are coming up with excellent customer support and a responsive team behind it.

I’ll be stuffed. Cryptopia have a terrible reputation spanning across multiple communities. They’re all sizzle and no steak.

Their support is shonky and unprofessional, they’ll delist a coin because someone made them mad and start carrying on like a pork chop. And they’ve had issues with multiple projects’ communities like TenX, Embercoin, Safex, Pirl etc. especially with smaller communities. Someone should tell them they ain’t there to root spiders but they’re as useful as an ashtray on a motorbike.

Not sure if Hex finally went walkabout because he had a few roos loose in the top paddock.

However they list dozens of shitcoins that have dead github repos because that’s as essential as a dead horse on a snag apparently.

Many users were devo with missing funds, transactions pending for months, wallets under maintenance for weeks, withdrawal fees that cost big bikkies, locked wallets, no support in months etc. Granted all exchanges suffer from these problems but it’s a bad sign when a smaller exchange has more complains than bigger exchanges. London to a brick! But let’s give them the fair shake of the sauce bottle…

Then they couldn’t handle the previous major influx of new users which was chockers, and being busier than a one-armed paper boy with crabs, they kept taking in new users thinking it’s hunky dorey until…crikey! It was a dogs breakfast and they were busier than cats burying shit.

Their interface and UI weren’t just horrible but always laggy as hell and it was bug city in there.

There are many bodgy exchanges out there so if you’re looking at Cryptopia I’d probably shoot through.

Sorry to spit the dummy, but they aint ridgey-didge.