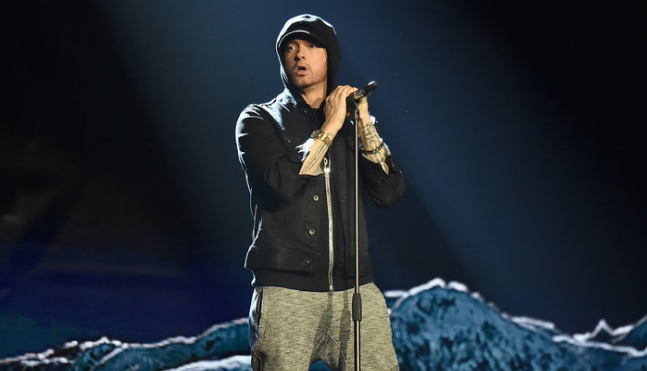 Bitcoin and cryptocurrency have taken another step toward mainstream awareness with a mention on U.S. rapper Eminem’s new album “Kamikaze” — a sign that bitcoin is slowly penetrating to different levels of society and out of the financial, fintech bubble it’s existed in for the last 10 years.

In the ninth track on the album, “Not Alike” — featuring Royce Da 5’9′ — Royce claims: “Remember everybody used to bite Nickel, now everybody doing bitcoin.”

Tried not 2 overthink this 1… enjoy. 🖕#KAMIKAZE Out Now – https://t.co/ANw73KbwMt pic.twitter.com/qfQoTYBTUy

Public awareness has been a major driver of the bitcoin price, which last year ballooned to almost $20,000 from around $1,000 per coin at the beginning of the year. The bitcoin price has since fallen back, dragging most other major cryptocurrencies with it, and is now trading at around $7,000.

Last year’s bull run meant a raft of bitcoin mentions in film, TV, and music as producers both praised and attacked the digital currency — that made many overnight millionaires and brought on the ire of the established financial industry.

On the animated cartoon comedy “Family Guy”, the show’s main character Peter Griffin suggests bitcoin as a solution to his family’s financial trouble.

On the sitcom “The Big Bang Theory”, the gang search for a lost laptop which held bitcoin that Sheldon and his friends purchased seven years earlier.

The mention on Eminem’s album is significant however as it suggests not a get rich quick scheme nor a way to sell illicit goods online, but rather something that “everybody [is] doing” — that it’s as common as knowing you bite the metal coin to test its quality.

Meanwhile, new research by economist Joost van der Burgt, a policy advisor at the Dutch National Bank, has found bitcoin price movements align very closely with Google searches — as awareness of bitcoin and cryptocurrency grows, so does the price. And there’s still a lot of room for growth.

Van der Burgt told CNBC the correlation between Google searches for bitcoin and the cryptocurrency’s price was almost a “perfect match” until the end of 2017.

“If the buzz is everywhere, it doesn’t matter exactly what the news is about… nobody wants to miss out and everybody’s trying to get a piece of it,” Van der Burgt said.

A survey out this week by Coinbase and carried out by researchers Qriously showed some 18% of U.S. students said they own (or have owned) bitcoin or some other cryptocurrency, twice the rate of the general population.

Those survey results chime with a paper from researchers at Imperial College London out in July that said digital currencies are primed for mass adoption.

According to the Imperial College paper bitcoin and cryptocurrencies will hit the mainstream as a way of paying for goods and services within the next decade, as many of those students surveyed by Coinbase become part of the working world.

Eminem’s “Kamikaze”, which dropped overnight without any promotion or fanfare, also attacks U.S. president Donald Trump who has been a target of the rapper’s before.

On the first track, “The Ringer”, Eminem says that the US president “sent the Secret Service to meet in person / To see if I really think of hurtin’ him / Or ask if I’m linked to terrorists” after his freestyles last year in which he attacked Trump.