‘Petro Has No Users Or Investors’ Reports Reuters

The Reuters news agency has issued a special report from Venezuela, casting serious doubts about the viability of its national oil-backed govcoin, the petro. Following a four-month investigation on the ground into the matter, the agency was unable to find any users, investors or readily recoverable resources that back up the currency. Moreover, the Maduro government appears to be unable to explain where the development process stands and its efforts to promote it are in disarray.

To hear Venezuela’s leftist President Nicolas Maduro tell it, this remote hamlet of 1,300 souls is perched on the cutting edge of an innovation in cryptocurrency.

Located in an isolated savanna in the center of the country, Atapirire is the only town in an area the government says is brimming with 5 billion barrels of petroleum. Venezuela has pledged those reserves as backing for a digital currency dubbed the “petro,” which Maduro launched in February. This month he vowed it would be the cornerstone of a recovery plan for the crisis-stricken nation. 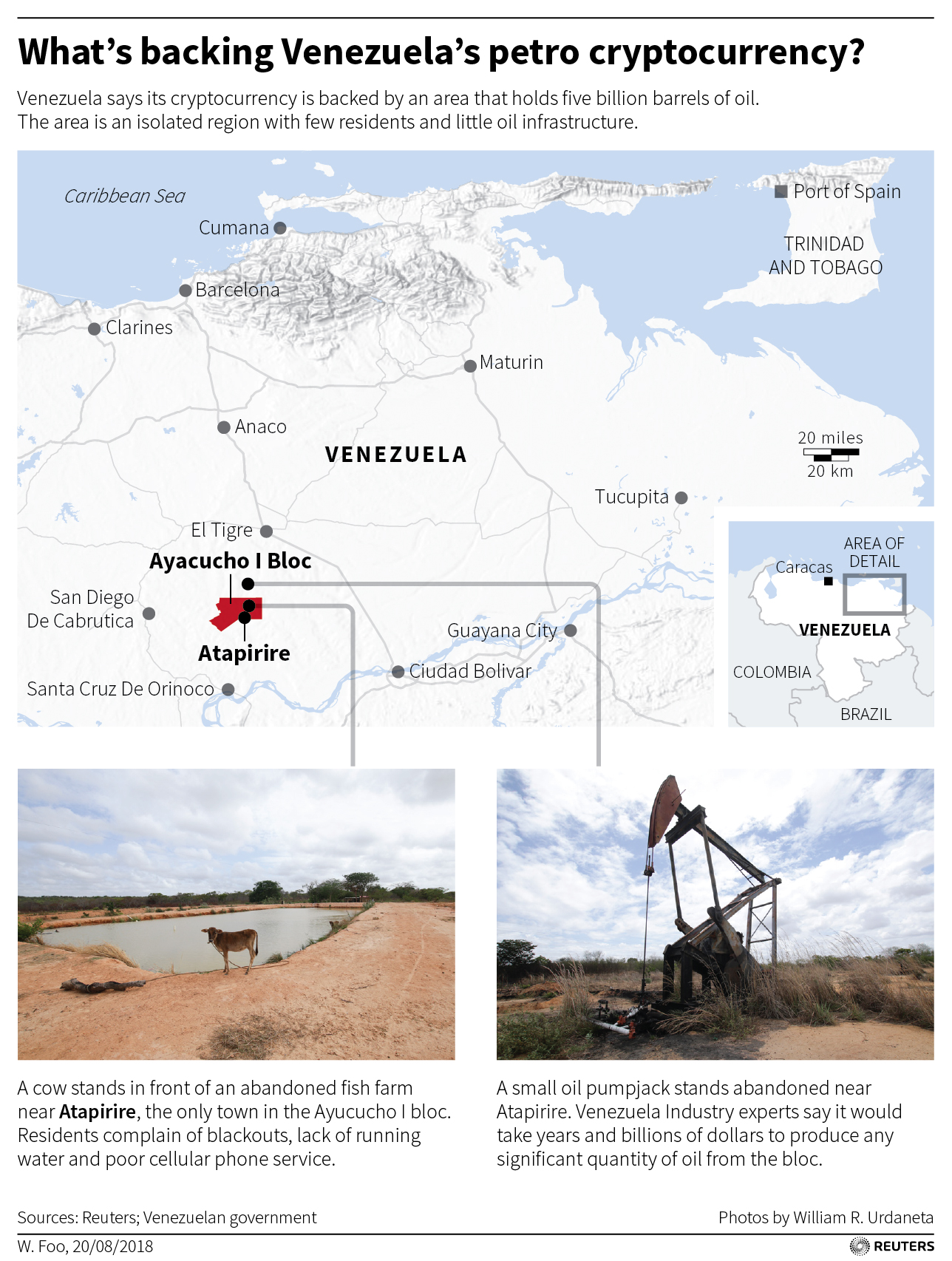 But Atapirire residents say they have seen no efforts by the government to tap those reserves. And they have little confidence that their struggling village has a front-row seat to a revolution in finance.

“There is no sign of that petro here,” said homemaker Igdalia Diaz. She launched into a diatribe about her town’s crumbling school, pitted roads, frequent blackouts and perpetually hungry citizens.

It turns out that Venezuela’s petro is hard to spot almost anywhere. Over a period of four months, Reuters spoke with a dozen experts on cryptocurrencies and oil-field valuation, traveled to the site of the pledged oil reserves and scoured the coin’s digital transaction records in an effort to learn more.

The hunt turned up little evidence of a thriving petro trade. The coin is not sold on any major cryptocurrency exchange. No shops are known to accept it.

The few buyers Reuters could locate were those who had posted about their experiences on online cryptocurrency forums. None would identify themselves. One complained of being “scammed.” Another told Reuters he had received his tokens without problem; he blamed U.S. sanctions against Venezuela and “awful press” for hurting the petro’s debut.

Senior government officials have given contradictory statements. Maduro says petro sales have already raised $3.3 billion and that the coin is being used to pay for imports. But Hugbel Roa, a cabinet minister involved in the project, told Reuters on Friday that the technology behind the coin is still in development and that “nobody has been able to make use of the petro … nor have any resources been received.”

The Superintendence of Cryptoassets, the government agency that oversees the petro, is a mystery. Reuters recently visited the Finance Ministry, where the Superintendence is supposed to be housed, but was informed by a receptionist that it “does not yet have a physical presence here.”

The Superintendence’s website is not functioning. Its president, Joselit Ramirez, did not respond to messages on his personal social media accounts. Phone calls to the Industry Ministry, which oversees the agency, went unanswered.

The Information Ministry did not reply to emails seeking comment.

Maduro added to the confusion this month by announcing that salaries, pensions and the exchange rate for Venezuela’s decimated currency, the bolivar, are now pegged to the petro. That move stirred bewilderment on Venezuela’s streets and among economists and cryptocurrency experts who say the petro-bolivar tether is unworkable.

“There is no way to link prices or exchange rates to a token that doesn’t trade, precisely because there is no way to know what it actually sells for,” said Alejandro Machado, a Venezuelan computer scientist and cryptocurrency consultant who has closely followed the petro.

The chaos speaks to the desperation and disorganization that are gripping Maduro’s government as Venezuela melts down.

The petro was supposed to help his administration weather the hyperinflation that has rendered the bolivar all but worthless. He vowed that a cryptocurrency, which allows financial operations to be carried out anonymously, would enable Venezuela to undermine U.S. financial sanctions and raise hard currency.

The government pegged the value of the petro to the price of one barrel of Venezuelan oil – currently around $66 – and promised to back it with crude reserves located in a 380-square-kilometer area (147 square miles) surrounding Atapirire. U.S. President Donald Trump in March banned Americans from buying or using the petro.

Analysts are skeptical of Maduro’s claims that the petro has already brought in billions in hard currency. They say digital records associated with the initial coin offering, or ICO, do not provide enough information to determine how much, if anything, has actually been raised.

“This certainly doesn’t look like a typical ICO, given the low level of transaction activity,” said Tom Robinson, chief data officer and co-founder of Elliptic, a London-based blockchain data company. “We have found no evidence that anyone has been issued a petro, nor of it being actively traded on any exchange.”

A visit by Reuters to the area around Atapirire, meanwhile, showed little oil-industry activity. The only visible rigs were small and aging machines installed years ago. Several were abandoned and covered in weeds.

In an opinion piece posted August 19 on Aporrea, an online Venezuelan commentary and analysis site, former Oil Minister Rafael Ramirez estimated it would take at least $20 billion in investment to tap the reserves, money that Venezuela’s troubled state-owned oil company PDVSA does not have.

“The petro is being set at an arbitrary value, which only exists in the government’s imagination,” Ramirez wrote. He oversaw the nation’s oil industry for a decade under late President Hugo Chavez. Ramirez is now in exile in an undisclosed location after being accused of corruption by the Venezuelan government, allegations he denies.

PDVSA did not respond to an email seeking comment.